On July 21st, 2019, one day before my birthday, I stared fear in the face and defeated it. I went skydiving and gained a new perspective on life.

The fact that I was going to jump out a plane at 14,000 feet going 125 miles per hour didn’t really set in until the plane was on its way up into the sky. As I peered out the door of the airplane, I felt knots of anxiety in my stomach, “Well, I can’t turn back now,” I thought to myself. At that moment, I closed my eyes, took a deep breath, and thought about my need to let go and be free.

While still onboard the plane, I opened my eyes to my camera guy smiling, with the comforting words, “You will do great, it’s ok,” a sort of freedom blanketed my soul. I was scared, uncomfortable, and nervous… But I felt confident that I would be ok.

And then the moment came…

The plane door opened, and I watched the first two people fall into the sky. They had the biggest, most freeing, and peaceful expressions on their faces. Then it was my turn. With my tandem partner behind me, we crouched at the door of the plane, I looked out into the sky, I let go of all my fear, and we jumped. 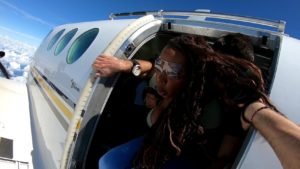 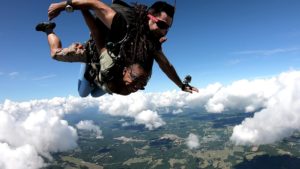 About 60 seconds later, the parachute was released, and I spent the next 5-minutes gliding in the sky, admiring all God’s beauty. The landscape was beautiful.  As I floated in the air, I felt a calming peace I have never experienced before. I had conquered a fear. 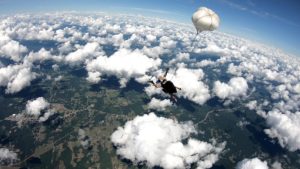 Many have asked why did I decide to jump. Honestly, it was a random thought that I just happen to execute. It was nothing I thought long and hard about. I considered it on a Wednesday, set up an appointment on a Friday, and jumped the following Sunday. However, in hindsight, the jump symbolized so many messages I desperately need in my life right now.

6 things I learned about life from skydiving

How often do we allow fear to stop us in our day-to-day lives because we focus too much on what may go wrong opposed to enjoying the moment and thinking of all the benefits and the things that could go right? How many times do we conquer something we fear and realize it wasn’t as bad as the seed we planted in our own mind?

Don’t be afraid to let go: When I stood on the edge of the opening of the plane, leading to the outside world, 14,000 feet above the ground, I had to let go. Right as I jumped out the plane I let go of fear and in doing so I encountered one of the most blissful and victorious moments of my life. I was proud, I felt accomplished, and I felt empowered. 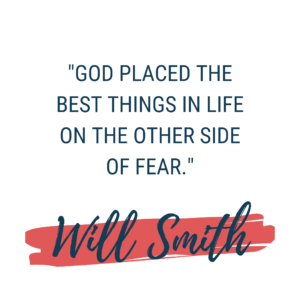 The importance of engaging with people who have “been there” before: My fear started to decrease when I searched online and read stories of other people who have skydived before. Their experiences gave me hope and made me feel more comfortable with the idea of jumping out a plane. Their stories gave me the courage I needed to proceed with the jump.

Surrounding yourself with people who have been where you are trying to go is imperative. It gives you insight on what to expect and although no two lives are exactly the same, knowing that someone before you did it, provides the message that if they did it, so can you.

With the right people, I can do anything: I jumped out a freaking plane! Like, it’s insane when you think about it. There is no way I would have ever done this without the support and help of those who are highly trained and skilled at skydiving. Skydive Atlanta is the only facility in GA certified by the US department of defense to carry military paratroopers.

If having the right people around can allow me to jump out a plane and land unhurt, that means the right people can also help me start a business or achieve my fitness goals. If you don’t know how to do something, don’t let that stop you, find experienced people to help you.

The best is yet to come: The initial jump out the plane was intense, I couldn’t think, the wind was hitting me at high speed, and I became way more aware of my breathing. But the best part wasn’t the initial jump, it was actually when the parachute was released, we began to glide, and I could admire earth’s beauty.

I’m braver than I thought: Due to fear, I doubt myself a lot. I’m always thinking of the what-ifs and panicking about the future opposed to staying present in the moment. Skydiving forces you to remain present in the moment. If I can muster up the courage to jump out a plane, I have the ability to conquer any other fear that comes into my mind.

Now anytime life gets tough I think to myself, “I jumped out a plane at 14,000 feet, snap out of it, you got this girl.” I’m hoping my ability to let go and trust the process at 14,000 feet will translate in other areas of my life here on land.

Check out a video of my experience below:

To Cover Up or Go Bare: The Big Debate Behind Psoriasis...

Alexis Crawford’s Death: “Trust No One” is the Wrong Message

Alisha Bridges - November 12, 2019
0
Clark Atlanta Student Alexis Crawford's death is heartbreaking. She was killed by her best friend/roommate and her boyfriend. Many parents have shared sentiments of...