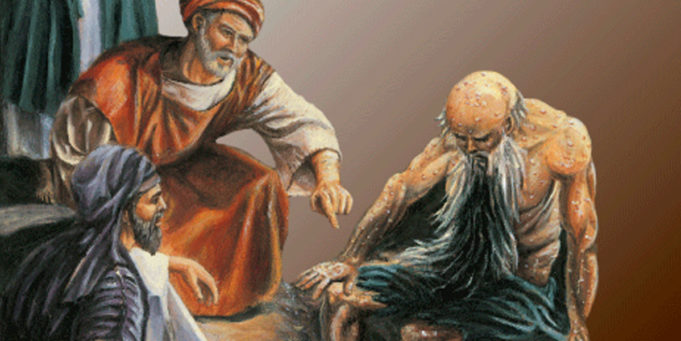 “That’s why you got cursed with your skin disease, God don’t like ugly…”

These were the sentiments from a man I went on a date within 2017. I believe his sentiments were a combination of feeling rejected, angry, and maybe hurt. Dating is already hard, but doing so with a chronic illness adds an additional pain (no pun intended). In my experience dating with psoriasis has made me more vulnerable but also more precautions on who I deal with on a romantic level. I’m usually very open about my disease and in the first time in 23 years of having psoriasis, this particular date was the first time a potential love interest ever used my disease as a tool to hurt me. Here is a quick glimpse of what took place: 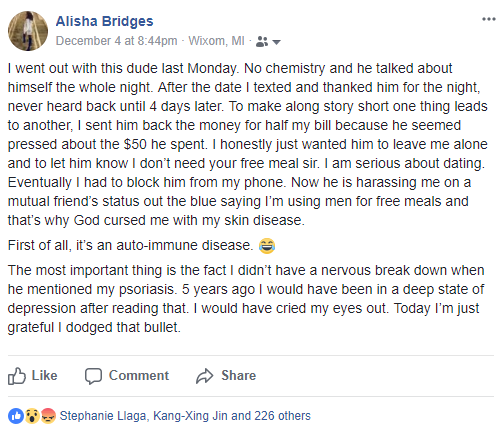 The entire story is somewhat long and exhausting, which would be explained with a few screenshots but it’s not worth it for this blog. But in a short version, during the date, I discovered there was no chemistry, but we ended the night amicably. A few days later when he reached out I informed him I wasn’t interested in pursuing things any further. He was not very happy with my decision, which I believe aggravated him. One thing led to another I ended up cash-apping him the money for my part of the date. A few days later he decided to make rude comments about me on a public Facebook post of someone I am friends with. His most insulting statement was “That’s why you were cursed with your skin disease…”

In an odd sense that moment was liberating for me. I didn’t cry, I wasn’t mad, I didn’t feel sorry for myself. I took joy in the moment of no longer being controlled by what others have to say about me in regards to my disease.  Had that moment been 5 years ago, I would have cried and felt sorry for myself. But today, I understand malicious and mean comments speak to that person’s character and has nothing to do with me, so I celebrate in my new found confidence.

Put Some Spice in Your Life for Psoriasis…

Alisha Bridges - April 8, 2019
0
If I could describe my psoriasis with a movie title, I would call it “Les Misérables” which translates into “the miserable ones.”...

Alexis Crawford’s Death: “Trust No One” is the Wrong Message

5 Emotions of Psoriasis and How Support Groups Can Help

3 Ways I Keep Track of my Health

5 Ways to Keep Your Sanity With Psoriasis

Alisha Bridges - March 11, 2020
0
Psoriasis drives me crazy and plays a role in all aspects of my life. I’ve dealt with it for over two decades and I...