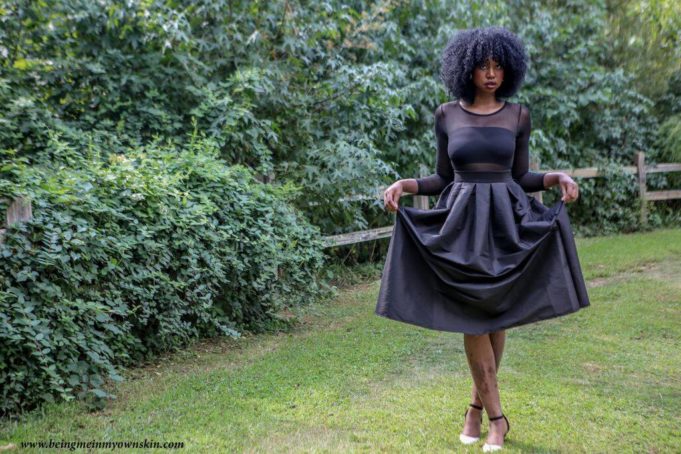 I’ve had severe plaque psoriasis since the age of 7. I’ve always been self-conscious about my disease, but back as a 20-something-year-old, I started to break out my shell slowly. During this time, I was working at a call center. One day while at work, I decided to take a 15-minute break. I went outside to get some fresh air and to steal a few rays from the sun. I was sitting on the trunk of my car when a male co-worker approached me. The guy started off with routine questions such as was I in college and what was my major. I wasn’t quite sure where the conversation was going, but I would have never guessed what had happened next.

About 3 minutes into the conversation, he asked what was on my hand. At the time, my hands were covered with a few plaques of psoriasis. Uncomfortable, I nervously began to explain my psoriasis and how it affects the body. He then cuts me off, looks at me, and says, “You know you’re a pretty girl, but your skin is really ugly.”

His words hit me like a big rig truck. I was angry, caught off guard, but mainly hurt and embarrassed. The nerve of him to walk up to me and think it was okay to make his comment. Honestly, thinking back on that moment, it wasn’t solely the fact that he told me my skin was ugly, I was hurt because he had told me something that internally I had already felt. I tried so hard to cover up my skin and to make it inconspicuous. It also made me realize that my efforts at trying to hide my disease with long sleeve shirts and pants were not working.

At that time, I had not yet met my future self. The self who isn’t afraid to speak out about my disease or to correct misconceptions and tackle stigma with accurate and reliably information. In that moment, the only thing I knew to do was to run and cry. I went to the restroom and balled my eyes out in hurt and pain. That moment will forever remain with me.

Navigating Fashion While Living with Psoriasis

Alisha Bridges - December 19, 2019
0
I love fashion, however, living with a visible disease like psoriasis creates a challenge for me to authentically express myself through my clothes. Some...

Your Skin is Ugly

6 Lessons about Life I Learned from Skydiving

Celebrities Who Have Psoriasis

Navigating Fashion While Living with Psoriasis

Alisha Bridges - December 19, 2019
0
I love fashion, however, living with a visible disease like psoriasis creates a challenge for me to authentically express myself through my clothes. Some...